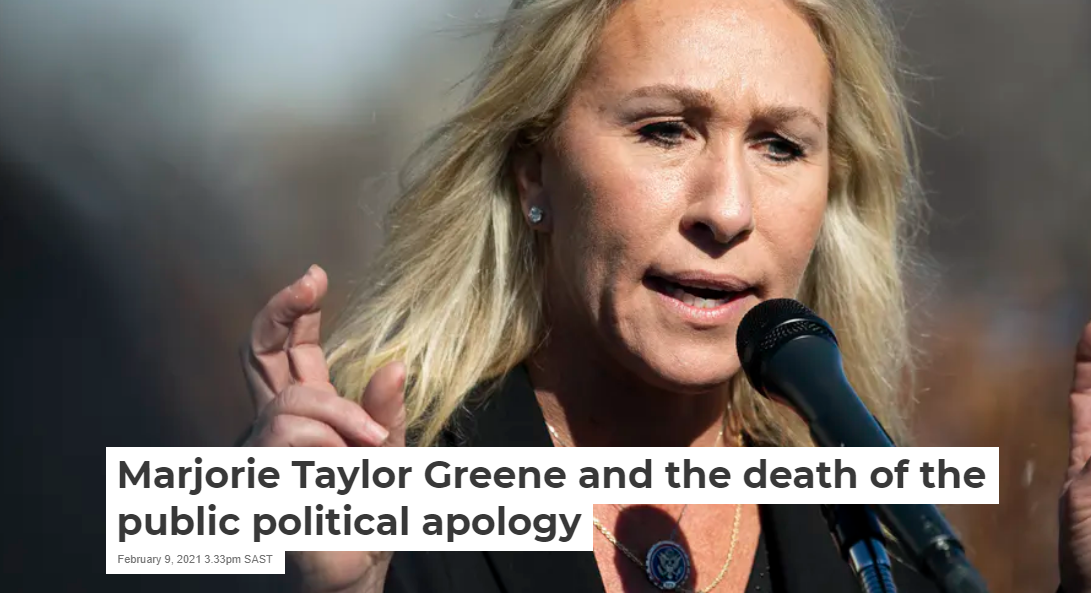 When Georgia representative and sometime QAnon enthusiast Marjorie Taylor Greene met with fellow House Republicans on Feb. 3, she may have apologized. Or she may not have.

During the closed-door meeting in which Greene’s conspiracy theory beliefs came up, we don’t know exactly what went down because, well, it was behind closed doors.

Speaking after the event, House Minority Leader Kevin McCarthy described Greene’s remarks as an apology, saying that Greene had denounced her previous statements and social media postings – which included the idea that mass school shootings are “false flag” operations and that California forest fires were started by Jewish space lasers – and that “she said she was wrong.”

U.S. Rep. Adam Kinzinger of Illinois, one of 10 Republicans who voted in support of the 2021 impeachment of Donald Trump, had a different take: “She was somewhat contrite, but personally I never heard an apology.” He added: “I didn‘t hear an ‘I’m going to say this publicly.’”

As a scholar who has written about the art of the public political apology, I found the whole episode fits into a larger pattern of nonapology apologies in the modern political landscape.

Sorry seems to be the hardest word
An apology, according to the Canadian sociologist Erving Goffman, is “a splitting of the self into a blameworthy part and a part that stands back and sympathizes with the blame giving.” Goffman goes on to say that after an offense has occurred, the job of the person apologizing is to show an understanding of the norm violated and the harm done.

What this means in practice is that offenders must identify what they did wrong and then demonstrate that they take responsibility for that wrong, that they accept the blame. To be a true apology this has to be accompanied with some sincerity and with a sense of how the offender will act differently in the future.

If a public apology includes these four elements – naming the harm, taking responsibility, sincerely accepting blame and committing to act differently – then it can help repair a relationship or even save a reputation.

Even if we are to take McCarthy’s word that an apology occurred in Greene’s case, we are none the wiser as to which parts of her embrace of QAnon and other conspiracies she had said sorry for.

She went on say that she had “stumbled across” QAnon and “was allowed to believe things that weren’t true, and I would ask questions about them and talk about them. And that is absolutely what I regret.”

So, is this to be taken as an apology?

Whether Marjorie Taylor Greene has met the criteria established by Goffman is, at best, open to interpretation.

‘Mistakes were made’
Part of the difficulty has to do with the loss of standards held in common by a community. For a scholar like Goffman, it was taken for granted that an apology reflected common norms of behavior.

Gone are the days when Richard Nixon and John F. Kennedy could agree, as they did in their second debate in 1960, that the United States should apologize when it is wrong, as when a long-planned Paris summit in 1960 collapsed after it was revealed the U.S. had covered up spy-plane flights over the Soviet Union. They naturally disagreed about whether the U.S. was in the wrong, but they agreed that apology was sometimes necessary.

Nixon went on to become an expert in the art of the nonapology, as seen in his response to the Watergate scandal. His “mistakes were made” approach, which uses a passive voice to avoid laying the blame directly on oneself, was later adopted by others, including Ronald Reagan over the Iran-Contra affair.

Today’s culture is too fractured for most public figures to risk a full-fledged apology. In the U.S., gerrymandered districts, continual fundraising appeals to a base, hyperpartisan media and a polarized electorate have conspired to deliver an environment in which apologizing is fraught with concerns. If one apologizes, it signals a backtracking to the base one is courting. If one refuses to apologize, that rallies supporters and donors.

In such circumstances, it is hard to admit you are wrong much less that you have behaved badly. In such an environment, it is perhaps understandable why Greene’s apology was behind closed doors and not delivered in public.

Find More on THE CONVERSATION

Games that are specific variations of poker on safety playground Toto

Why you should consider donate to Israel?