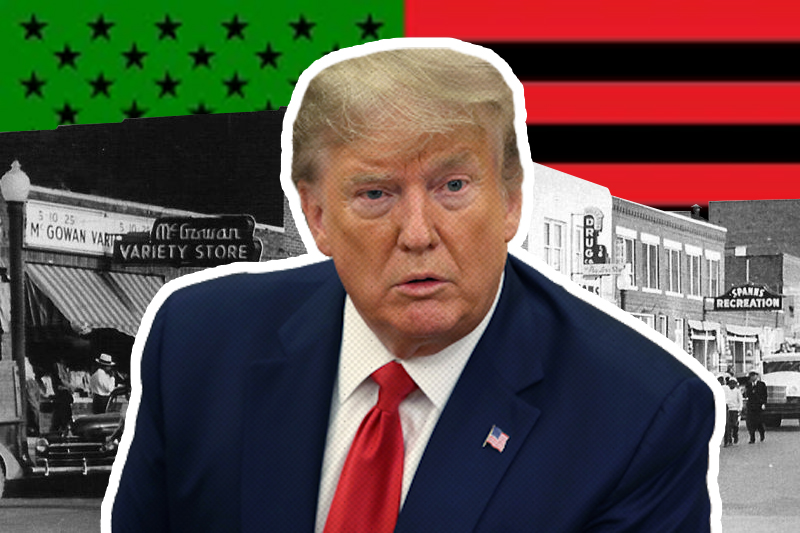 For months, White House insiders have reported that the President is growing restless in Washington, and longs to return to the campaign trail. After all, Donald Trump’s political rise was rooted in his freewheeling rallies, where he pontificates at-length about his own strengths, belittles his adversaries and arouses the crowd like a carnival barker.

Now, the White House reports that Trump will return to the trail for the first time since March, when coronavirus restrictions forced him to hunker-down in the executive mansion. Though he was able to maintain an audience for several weeks during his daily live press briefings (which he has since ceased), it’s been three months since the President has been able to stand in front of a raucous crowd of fans who will cheer his name and celebrate his musings. But oh how the world has changed since March.

In addition to the global pandemic and the economic tailspin that continue to plague the nation, the death of George Floyd at the hands of a police officer fast-tracked the cause of racial justice in the United States, making equality and police reform a top priority not just for the far-left, but for much of the political center. Even Republican Mitt Romney has knelt in solidarity with the Black Lives Matter movement, and it was only eight years ago that his party wanted him to be president.

So there’s no escaping the conversation of racial justice as Trump prepares to rally his followers on June 19th and while no one can ever predict what this president plans to say, his very schedule has already dropped a bevy of hints.

Foremost, consider the day that President Trump has chosen to resume his reelection campaign. The 19th of June is, for many, a commemoration of the end of slavery. Juneteenth, as it’s called, memorializes the 1865 abolition of slavery in Texas, the final state to receive news of Union victory in the Civil War. While some deem Juneteenth the “Black 4th of July,” there’s little cause to believe that Trump is headed to Tulsa to celebrate the progress of African-Americans.

Then there is the question of where Trump will hold his first rally in months. The President will be heading to Tulsa, Oklahoma to speak to his supporters, a city with a dark history of racial violence, including the deadliest instance of racist brutality in American history. The so-called “Black Wall Street Massacre” occurred in 1921, and resulted in the death of 300 Americans in Tulsa, which at the time had one of the most thriving black middle classes in the country. Dubbed “Black Wall Street” to celebrate the financial providence of its African-American residents, Tulsa was targeted by white supremacists who burned black-owned businesses to the ground and indiscriminately shot at Tulsa residents in a two-day bloodbath.

While the incident has not been a traditional unit of American history classrooms, it’s gained heavy attention in recent years, most notably by the hit HBO series Watchmen, in which the pilot episode depicts a ten-minute reenactment of the violence. But would Trump really choose Tulsa to speak for the first time since George Floyd’s death as an act of intentional malice?

Michelle Goldberg of The New York Times contends that “it’s highly unlikely that Trump, who reportedly didn’t know what happened at Pearl Harbor when he visited in 2017, is familiar with the Tulsa massacre.” Still, she argues, “there are people around Trump who are sophisticated enough to understand the message the rally is sending, including Stephen Miller, one of the president’s closest aides and an out-and-out white nationalist.”

So what calculus is at play behind the choice to resume the Trump campaign in Tulsa on Juneteenth? Florida Congresswoman Val Demings tweeted her response this way: “The president’s speech there on Juneteenth is a message to every black American: more of the same.”

Indeed, Trump does have a pattern of turning the screw on hot-button issues as opposed to deescalating controversy. In 2017, after a white nationalist march in Charlottesville, Virginia resulted in the death of a counter-protester, Trump insisted that there were “very fine people” on both sides of the demonstration (which featured armed Nazis marching past a synagogue). And his first speaking engagement after the episode was in Phoenix, a generally left-leaning city with a large Hispanic population whose mayor begged the President to stay away.

After congressional Democrats launched an impeachment inquiry into Trump’s dealings with Ukraine, the President’s first rally was in the Minneapolis district represented by Congresswoman Ilhan Omar, a progressive critic of Trump’s whom the President once told to return to Somalia (where she’d fled as a refugee when she was a child).

In both instances, Trump spoke in states that he had won in the 2016 election, though he spoke in mostly liberal metro areas knowing that his presence would attract protest, media attention, and a signature pinch of chaos.

But if the large-scale public demonstrations that have become ubiquitous in the last few months are any indication, Trump’s return to the campaign trail will likely attract its fair share of protesters. Of course, Trump’s supporters have been just as starved of the President’s voice and it’s unlikely that he will struggle to fill arena seats. Trump may get his pinch of chaos yet.

Still, optics aren’t everything. Even if thousands flock to Tulsa to either support or protest Trump’s rally, it’s what he says that will make a difference. As the national discussion of race continues to overwhelm public discourse, and as Joe Biden continues to lead Trump in national polls, the Tulsa rally may prove to be a defining moment of Trump’s reelection campaign, where he will deliver a message that could shape his entire post-pandemic candidacy.