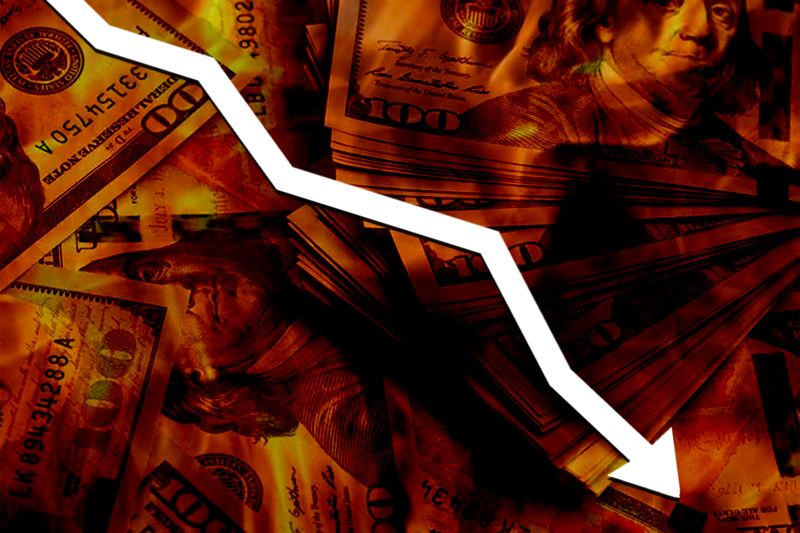 The stock market had its worst day since the first American case of COVID-19 was detected back in March. The market tailspin on Thursday came as concerns grow about a second wave of coronavirus cases and as the Federal Reserve forecasts an unsettling economic outlook.

After weeks of the market supposedly turning a new leaf, both the Dow and the S&P 500 took a nosedive. The Dow Jones Industrial Average dropped 1,900 points, a 6.9% drop, while the the S&P fell 5.9%. There has not been a single-day drop of this magnitude since the onset of coronavirus lockdowns, when the market bottomed-out on March 23rd. And while both indexes are still considerably higher than they were at that point, the drop was still a punch to the gut for hopeful investors, who had seen the market begin its rebound in the weeks since.

The CBOE Volatility Index, a metric of investor uncertainty, spiked considerably on Thursday, jumping 47%—it’s highest point in a month. Still, not everyone was blindsided by Thursday’s dip. Many already recognized that the relative calm of the markets in the face of national upheaval would not persist.

What was the cause?

There are a few factors that caused Thursday’s plunge.

First, there is a fear that the second wave of coronavirus is beginning to take effect as states re-open. Several regions of the United States eagerly relaxed stay-at-home orders, following protests to end lockdowns and public calls to reopen the economy. Every state in the country has now eased restrictions to some degree, with a handful allowing dining-in at restaurants and bars, in-store commerce with few mandates on the use of facial masks.

But only a few weeks into easing, 21 states reported an increase in new coronavirus cases, according to Reuters.

Now that it’s evident that the pandemic has not ended, investors who had purchased stocks that depended on an unrestricted economy are now dumping them as fast as they can. There was a huge selloff of airline, cruise, and retail shares. Upon the news of rising cases, many investors once again moved their money into companies like Zoom, Netflix, and Peloton, all of which specialize in at-home amenities.

Troubling News from the Fed

The giant selloff on Thursday was also a response to a less-than-inspiring announcement from the Federal Reserve.

On Wednesday, the America’s central bank said that the economy was unlikely to bounce back anytime soon. Predicting that unemployment rates would remain high for a least a few years, the Fed stated that it would keep interest rates around zero until the year 2022. The Fed’s lack of confidence in the future of the economy caused mayhem on Wall Street.

A sense of uncertainty seems to be the common thread between the grim coronavirus forecast and the Fed’s bleak economic outlook. No one knows when, or how forceful, a second wave of COVID-19 will hit, nor can experts say with certainty how long it will take for the economy to recover. And if there’s one thing the stock markets despise, it’s uncertainty.