The Russo-Ukrainian war has stalled as both sides are determined to achieve their stated goals. Two rounds of discussions between Ukraine and Russia, which began on February 28 in Homel, Belarus and ended on March 3, did not achieve diplomatic success. However, both sides decided to keep the line of communication open. At the same time, Turkey launched a round of talks between the two sides as part of a series of multilateral efforts. However, this did not bring any diplomatic success. However, hundreds of thousands of civilians were trapped in Ukrainian cities under Russian attack. However, the Russian military has increased shelling of the southern port city of Mariupol to break Ukrainian resistance.

On the other hand, a military convoy approaching 40 miles north of Kiev, made up of supplies and armored assault vehicles, broke through, threatening to besiege and isolate the capital, Kiev. Russian columns have advanced into nearby towns and forests to hide from aerial surveillance.

According to Maxar Technologies, Russian armored formations are advancing in and around Antonov Airport, northwest of Kiev. Images from the far north show components of convoys near the town of Lubyanka, with towed artillery shells in nearby firing positions, most likely in preparation for an attack on the capital.

In another dangerous move, Russian Foreign Ministry spokeswoman Maria Zakharova believes Ukraine and the United States have violated Article 1 of the Biological and Toxin Weapons Convention.

According to a Russian spokesman, the documents show that the Ukrainian Ministry of Health ordered the destruction of samples of plague, cholera, anthrax and other viruses before Russian troops entered Ukraine on February 24.

Zakharova said that the biological weapons components were being manufactured in Ukrainian bio-laboratories near the Russian border.

She claimed that the United States was conducting biological research in Ukraine to develop a system for the covert transmission of dangerous pathogens.

In response, the United States has denied Russia’s accusations that it operates biological warfare facilities in Ukraine. She alleged that Russia could be deploying chemical or biological weapons in Ukraine, or using them to organize a false flag campaign.

Unsurprisingly, China’s Foreign Ministry claims that the US controls 336 labs in 30 countries, including 26 in Ukraine alone. It also demanded that the US provide a detailed description of its biological military activities at home and abroad, as well as submit it for international verification.

Observers suggest that Russia’s war in Ukraine and the bombing of its cities have raised fears about any damage to such facilities, which could result in the migration of disease-causing pathogens.

Although both sides are depriving their adversaries of information space, the issue of Ukraine’s laboratory capabilities is a growing concern among many around the world.

History tells us as the best guide that war zones can provide the ideal conditions for infectious diseases to spread throughout the world.

A state of war where disjointed political institutions, failing health systems, and mass gatherings of vulnerable people, coupled with environmental degradation, can create the ideal storm of conditions for a catastrophic epidemic of infectious disease.

It is also clear that when people leave an area of ​​violent conflict, there is always the possibility of bringing infectious diseases with them, contributing to the spread of infection.

Although the concept of biological and chemical warfare may seem strange to some, history has shown that nefarious hidden agendas in sports can become public, which is always costly for ordinary people. “Only a fool learns from his mistakes,” Otto von Bismarck once said. We must not let fear and foolishness take over our conscience, because the wise learn from the mistakes of others.

Instead, we should focus on how to counter such scenarios. Surprisingly, 21st century countries are taking a futuristic approach by encouraging various scenarios to better address this issue. Meanwhile, following such protocols is not only the responsibility and domain of state institutions, but also a signal to

Underground bunkers are built with high walls, heavy doors, food, medical supplies, and most importantly, a functional filtration system. Technology can only provide the clean, breathable air that humans need to survive. Without a proper air filtration system, a bunker and all the equipment in it would be useless and would have no reason to survive another day. That’s why, to keep their families safe, millions of people around the world have chosen a Castellex chemical biological nuclear air filtration system. 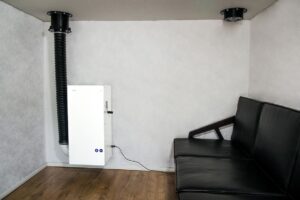 The Castelex NBC Air Filtration System is easy to use and delivers great results. The system has an efficiency rate of 99.99 percent and is designed to use the least amount of electricity. The NBC filter can filter harmful particles, including biological, chemical and radioactive waste, from the air. In addition, the Castellex Air550 NBC air filtration system can pump clean air from outside into a 24-person fallout bunker.

Castelex offers international shipping and exceptional customer service to ensure that everyone has the opportunity to live a life free from danger. Choosing a Castellex Air550 NBC air filtration system for your bunker is probably the most important step you can take to protect your loved ones.