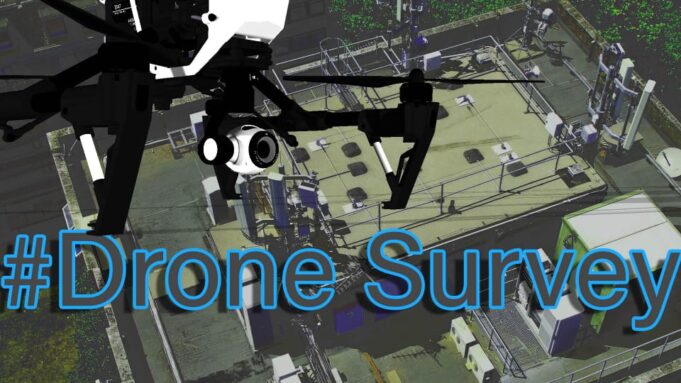 Unmanned aerial vehicle (UAV) surveying has a wide range of applications, as you’ll discover if you keep reading…

A Drone Survey: What Is It?

One of the most prevalent and most costly forms of drone survey is an “unmanned aerial photogrammetric survey.” These surveys employ the science of photographing objects so that they can precisely measure land and building sites.

More companies are investing in or already using drones to perform research. Surveys are undertaken to produce a point cloud of measurements. With the help of these, you may construct a three-dimensional model of a specific location or building or construction site.

Drone surveyors rely heavily on photogrammetry, which is the process of taking measurements from RGB data. A properties thermal and aerial imagery may also be captured via drone sensors. A point cloud picture may be created using data collated. Buildings and terrain may be represented in three dimensions using point clouds.

With the information from the drones, firms that employ them may make significant choices concerning planning, structures, and property borders.

Businesses in that use drones for aerial surveys benefit greatly from the time savings that come with using drones instead of human techniques that often call for a crane or a ladder. Companies may save money and time by making use of this technology.

Several factors influence the accuracy of survey drones, including the camera on board, the quality of the camera, the altitude at which the aircraft is flying, the amount of vegetation on the ground, and the drone mapping software used. Drones used for industrial and commercial purposes often have a 2cm accuracy level. Hobby drones with a price tag under $100 may generate images with an accuracy of 5 meters.

Surveyors who use drones must be registered with the Civil Aviation Body (CAA), the country’s independent aviation authority. An “operator ID” and a “flyer ID” must be acquired if the operator desires to operate the drone independently.

For this, the drone pilot must first pass a theoretical exam verifying ones flying skills and familiarity with the laws and regulations that apply to drone operations.

Using drones to fly over buildings and even people, as most drone surveyors must, the CAA may mandate that they undertake further drone operation and surveying training before they can utilise their services.

When it comes to an assessment, drones are typically considered a safe and more efficient method. Building surveyors that utilise drones benefit greatly from drone surveys since they may evaluate areas and structures that were previously inaccessible.

Drones are less cumbersome than cranes, ladders, and cameras when inspecting a place. As a result, they are easier to transport and need fewer personnel to run. Because fewer people are required to conduct the inspection, both the survey firm and the clients that use drones save money.

Even in rainy and overcast situations, drones may be helpful. Drones make it harder for surveyors to postpone or cancel projects at the last minute, saving them money and time.

Drone safety checks are likely to be the major advantage of the technology. Drones are less likely to cause workplace accidents because of the reduction in cranes, ladders, and other heavy equipment. Traditionally, surveying has been done in a more labor-intensive manner.

It’s possible for one person to carry out drone inspection. Survey firms do a complete risk assessment and fly route planning to minimise the chance of damage. Drone usage in the UK is regulated to the point where anybody using a drone is required to register. If they don’t have permission, they also can’t fly a drone farther than 150 meters (horizontally) away from anybody.

Drone Surveys have their drawbacks:

Regulation of drones by the CAA poses an additional problem for those who use drones for surveying purposes.

The costs of deploying drones in your business are prohibitive for some because of licensing and insurance requirements. On the other hand, the majority of individuals believe that the long-term benefits of incorporating drone surveys into your business much outweigh the initial outlay.

Additionally, smaller commercial drones can only scan a certain amount of ground surface area at a time. It’s common for this problem to be solved by repeating drone flights. This adds to the time and effort necessary for the survey and the possible cost.

Where Can I Find a Drone Surveying Company, and How Do I Go About Hiring One?

Any good quality Drone Survey Inspection company use commercial grade drones and modern mapping technology to capture all of the necessary data from your website. Google Maps integration and 3-D map-making are also accessible. Capturing high-quality films and photographs with low interruption and minimal safety risk is a good alternative for any surveyor. Search the local web and find a qualified surveyor today.